Everything You Need to Know About the Vaccine Mandate 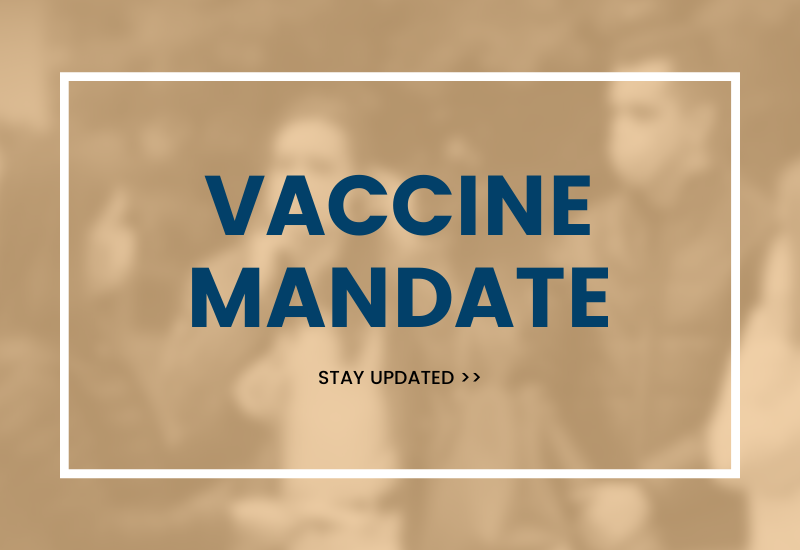 An update on everything you need to know about the vaccine mandate:

As of December 8th, 2021 the Senate has voted to appeal President Biden’s vaccine mandate. However, this action is not necessarily a threat to the mandate itself, as the Democratic leaders are unlikely to take up the measure, and the White House has said that the President will deny the appeal if it reaches his desk. Currently, it looks like the mandate will stay in place despite this appeal.

President Biden also released a list of deadlines and guidelines for companies and their employees to adhere to:

There are likely to be further updates for this vaccine mandate so stay up to date by checking back here for more.

On September 9th, 2021, President Biden ordered the Labor Department, also known as OSHA, to issue mandatory vaccine mandates for companies with 100+ employees. The President also stated that employees who do not wish to be vaccinated will need to conduct weekly COVID testing, however, it is unclear which tests will be accepted at this point.

OSHA has yet to enforce this order but is expected to begin rolling out a plan within the upcoming weeks using emergency authority. This mandate is expected to impact nearly 80 million private-sector workers. Employers who do not comply with these orders could face a fine of around $13,600, per violation.

In addition to the 80 million private-sector workers that will be affected by this announcement, the President also placed an executive order requiring all federal workers and about 17 million health care workers in hospitals and clinics that accept Medicare and Medicaid payments must also get vaccinated. The Centers for Medicare & Medicaid Services (CMS) will be tasked with enforcing the mandates for healthcare workers.

The White House has suggested that private-sector employees have about 50-90 days to comply and get vaccinated once OSHA begins to enforce the mandate. OSHA only has jurisdiction in 29 states, so those other 21 states have their own agencies that are also expected to enforce this mandate on their own timeline.

For healthcare workers, the CMS is issuing a so-called interim final rule, which becomes effective immediately upon official release, in mid-to-late October. The CMS has notified all workers who are not currently vaccinated to begin the process immediately. Federal workers will have about 75 days to get vaccinated.

These mandates are new and are subject to be updated, so check back for more. If you would like to learn more about everything you need to know about the vaccine mandate, or have any questions about how these mandates will affect your business, please reach out to CKH Group.

The above article only intends to provide general financial information and is based on open source facts, it is not designed to provide specific advice or recommendations for any individual. It does not give personal tax, financial, or other business and professional advice. Before taking any form of action, you should consult a financial professional who understands your particular situation. CKH Group will not be held liable for any harm / errors / claims arising from the articles. Whilst every effort has been taken to ensure the accuracy of the contents we will not be held accountable for any changes that are beyond our control.

ready to talk to a consultant?

Book Now
We use cookies on our website to give you the most relevant experience by remembering your preferences and repeat visits. By clicking “Accept All”, you consent to the use of ALL the cookies. However, you may visit "Cookie Settings" to provide a controlled consent.
Cookie SettingsAccept All
Manage consent

This website uses cookies to improve your experience while you navigate through the website. Out of these, the cookies that are categorized as necessary are stored on your browser as they are essential for the working of basic functionalities of the website. We also use third-party cookies that help us analyze and understand how you use this website. These cookies will be stored in your browser only with your consent. You also have the option to opt-out of these cookies. But opting out of some of these cookies may affect your browsing experience.
Necessary Always Enabled
Necessary cookies are absolutely essential for the website to function properly. These cookies ensure basic functionalities and security features of the website, anonymously.
Functional
Functional cookies help to perform certain functionalities like sharing the content of the website on social media platforms, collect feedbacks, and other third-party features.
Performance
Performance cookies are used to understand and analyze the key performance indexes of the website which helps in delivering a better user experience for the visitors.
Analytics
Analytical cookies are used to understand how visitors interact with the website. These cookies help provide information on metrics the number of visitors, bounce rate, traffic source, etc.
Advertisement
Advertisement cookies are used to provide visitors with relevant ads and marketing campaigns. These cookies track visitors across websites and collect information to provide customized ads.
Others
Other uncategorized cookies are those that are being analyzed and have not been classified into a category as yet.
SAVE & ACCEPT